Is it Spring yet? Ramblings and Cards by Bibi

Hello everyone! How's the weather in your part of the world? We had enjoyed such an early spring here in the south-east of Norway, with spring flowers blooming weeks before usual. All was good, better than good! Until Thursday last week.... Lots and lots of snow in just a few hours. Crazy! I had an appointment at the vet at 8 am (my dog Ulla's annual check-up and shots) and the vet's clinic is at the end of a countryside road so I called first to ask whether they had shovelled her road, which they had not, but several cars had driven on it already, she said, so I took the chance. It went well (our car still had winter tires), but I could feel the snow pushing against the "belly" of the car so if there had been just a few centimetres more snow I'd probably get stuck out there in the boonies. While I was at the vet's, several people called to cancel their appointments. Chickens! Or maybe not .....

On my way back home there was a 3 kilometre long queue over the bridge and it was not moving at all! You'd think Norwegians knew how to drive in these conditions, but it's the same every time the first snow falls - and this IS the first real snowfall we've had since last winter. I decided to take the long route up the river instead (an extra 50 km), just to find it was nearly as bad on that side.... So what do a girl do? Go for a walk with her dog, of course, in the hope that the traffic would be moving faster by the time we came back to the car. Well, it wasn't... but Ulla had a blast, playing in the snow!

I dug out some of my flowers that had been covered with a 25 cm layer of snow for 3 days. Pansies may look fragile, but don't judge a book by its cover! (Or in this case,  don't judge a plant by its flower ...) 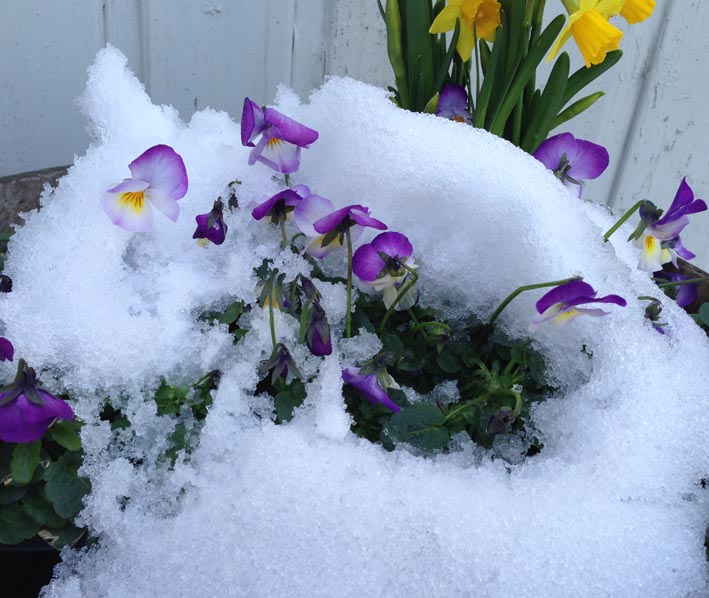 When I write this, it's been exactly one week since that very surprising snowfall; the sun has done its job and melted the nasty snow away, and warmer days are here again. Tjoohoo! :-)

Anyway, didn't I say "cards" up there in the headline? I believe I did! With no further fuss about nothing, here they are - all summery and springy.


The next card is not made by me, but I just have to share it!
As part of an article about dog and cat themed paper from Graphic 45 and Anna Griffin,
my friend Judi Kauffman made this card with my dog's name! How cool is THAT?
You can read the article here: http://scrapbooking.com/article/83043 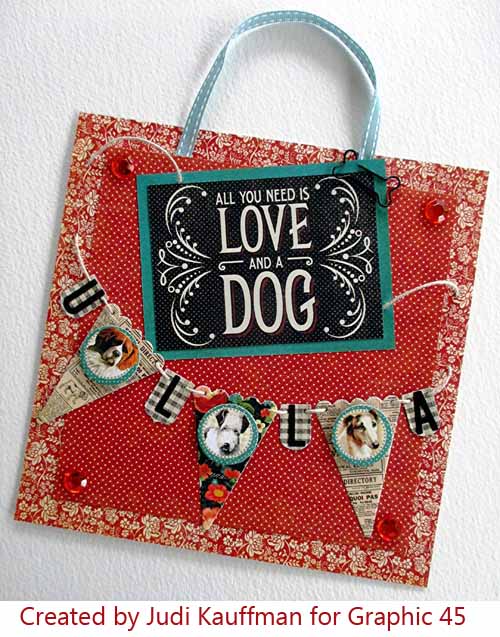 Judi made this card back in February, and then sent it to me after the photo shooting was over.
It's hanging on the wall in my studio :)

Here's one more photo of my famous dog, this time in sunshine!

And with that, no - wait! While I have your attention, have you joined my giveaway this month?
You have until April 21st, noon central European time: 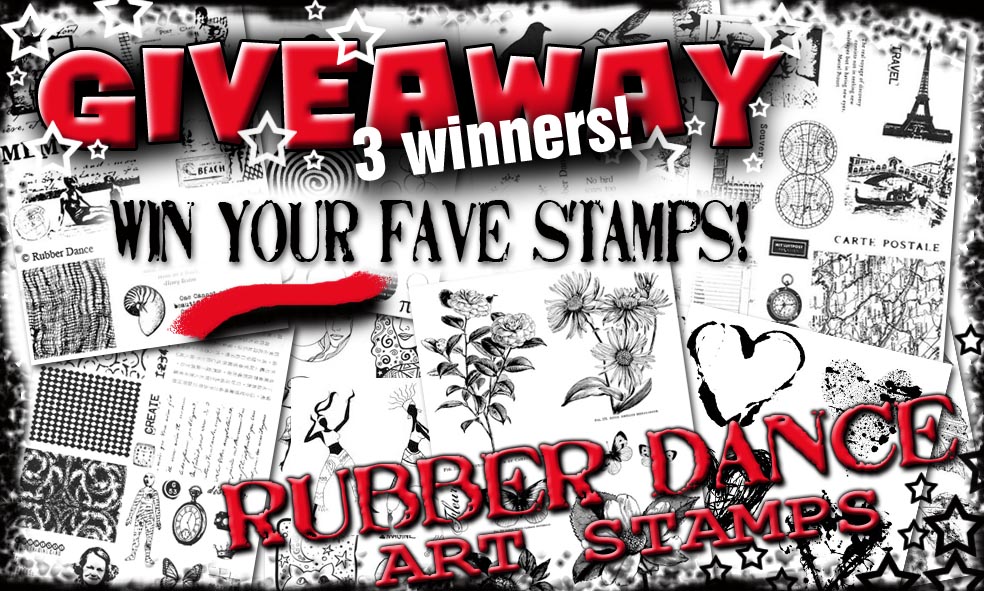 Thank you for stopping by. I wish you a wonderful day,
and lots of nice weather - wherever you are.

All the stamps used on my cards are from Rubber Dance, and you can find them all here.
bibi Judi Kauffman spring

Majo said…
Beautiful creations, dear Bibi, and YEAH, one of them is mine :) Love the pics of Ulla :) Those little squares are amazing, so many colours on such a small space, love it!
Sunday, April 05, 2015

Bibi Lindahl said…
Thank you, darling! ♥ I thought it was high time that I showed some photos of Ulla. She's always with me in the studio, keeping me company (and often snoring on her carpet) while I work - or play :) Glad to hear you like my squares - I had challenged myself to stamp on those, much smaller than I usually do.
xox
Sunday, April 05, 2015

Artatag said…
Wow, that was a busy girl. The snow did not do any harm to your creativity! Lovely projects! All of them!
But of course Ulla is stealing the show ;-) I know her in person, she is such a sweety!
xox
Sunday, April 05, 2015

Craftyfield said…
Great cards Bibi, I see lots of creative ideas here (and filing them away for future use!) . As far as the weather is concerned we haven't had snow in the south of the UK but it never gets warm until the end of April. Lovely pic of Ulla by the way!
Sunday, April 05, 2015

Lizzy Hill said…
Fabulous cards! LOOOVE the lollipop flowers & the crackle in the bee card is a great touch. As for the SNOW... Totally BIZZARE.... Loved the pansy photo & your for dog frolicking in the snow:):))
Sunday, April 05, 2015

massofhair said…
Ulla is adorable Bibi, i do love an intelligent dog, must be so lovely to have her alongside you in your studio! some amazing cards you have shown and my favourite has to be Bee one for it's amazing crackle and the flower one for it''s amazing distressed flowers and those stems are amazing.

Bibi Lindahl said…
Thank you all for taking the time to leave such sweet comments! ♥
Monday, April 06, 2015

Julie Lee said…
Bibi - do you ever sleep??? How do you find the time to create such stunning and beautiful cards and run a business and be a friend to such an amazing dog and leave such lovely comments on the blogs etc that you follow? These cards are so pretty and quirky at the same time, which I love and such an inspiration, I'm determined to join in the RD challenge for April! xx
Tuesday, April 07, 2015

Susanne Rose said…
Bibi, I love your creations! No card looks like the other! It's totally inspiring. Hugs, Susanne.
Tuesday, April 07, 2015

Bibi Lindahl said…
LOL, I think sleep more than most people! Sometimes I think it's a little embarrasing to say that I need a nap during the day, so I call it siesta instead ;-)
I didn't make all the cards in this post at the same time - I just never got around to published them right away after making them. Some days are certainly busier than others, but I need to "steal" time from work and create now and then...or else I'd go cocco-coo! ;-)
Thank you for you kind words! xx 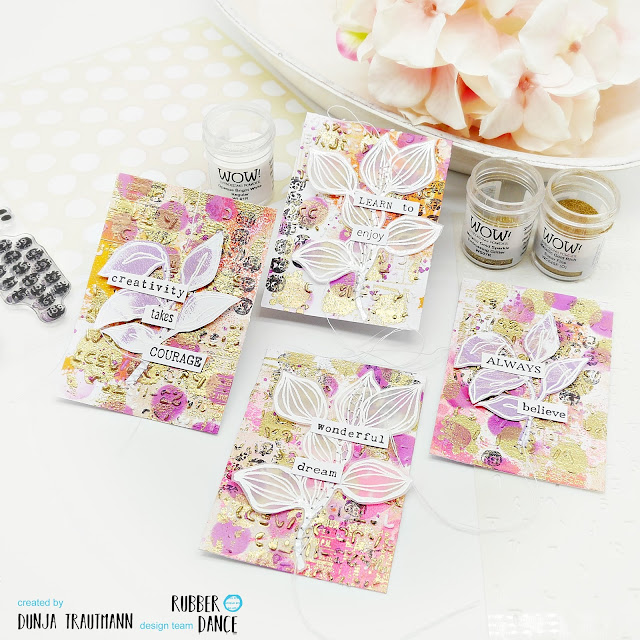 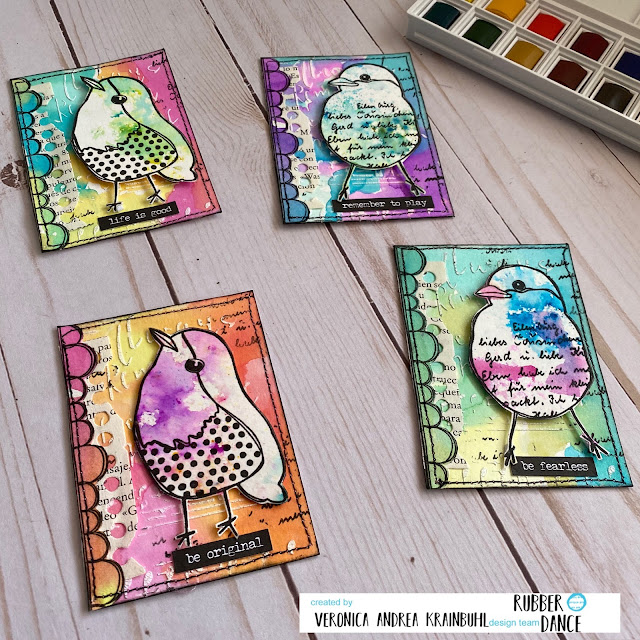 Hi everyone, Verónica is here. Today I come with a colorful and fun series of Atc´s that I have made with the beautiful  Textured Birds set .  Let's go step by step, so you can cheer up and make your own.I hope you enjoy it and you like it, it is done with great affection. We cut watercolor paper that measures 3 1/2 inches by 2 1/2 inches, if you prefer in centimeters 8,9cm by 6,4 cm approximately. Now we create the backgrounds by coloring with watercolors, pigments, or inks. I have used pigments dissolved in water, to give it a watercolor effect. When they are ready and dry we apply textured paste with some stencils that we like. In my case Distress Textured Paste (crackle). We can use the embossing gun to speed up the process or let it dry. We continue, we are going to stamp these adorable and cute little birds with a waterproof ink. Comes one of the most relaxing and fun parts, the coloring. You can use what you have or what you are used to
Read more 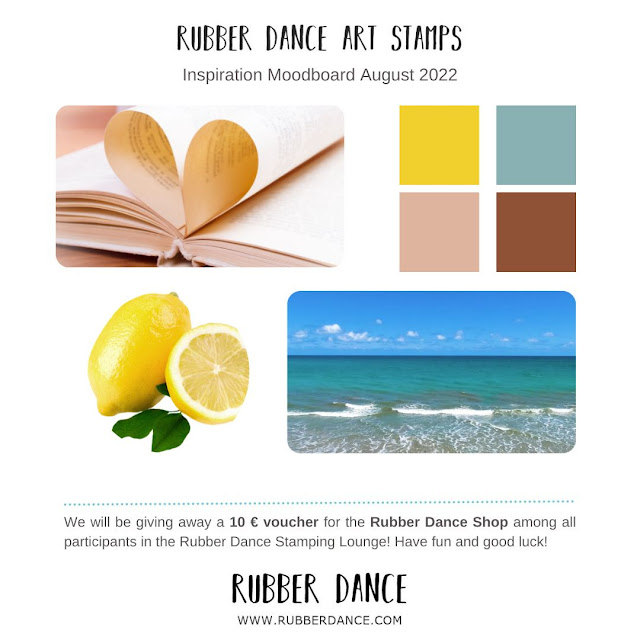 Hello Rubber Dance friends. Gail here today with some fabulous August inspiration from the team!! The first day of the month so we have a new moodboard.  You can be inspired by anything on the moodboard; one or more colours, things, shapes, memories it inspires, things it makes you feel, etc. etc..  It's basically anything goes, but in case you need a little help to get started Dunja has put together this awesome inspiration for you. Here's the wonderful August Moodboard If you are creating anything with Rubber Dance stamps this month, whatever your inspiration, please share in our FB fan group cos someone is going to win €10 to spend in the Rubber Dance store !   Don't forget.... You gotta be in it to win it! Now here are the team's gorgeous projects to get us started....     Mariken us ed Mix A Sentiment #2 and Carved Collection #5   Josi used Carved Collection #1 , Sketchy Flowers #3 , Mixed Media Marks and Vintage Postcard     Priscila
Read more 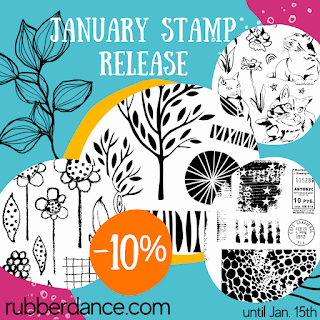 Hello my dear crafty friends!  It's time for our first release this year! All stamps are available for pre-order over in the store. Orders that are including new sets will start shipping after Jan. 22nd! We have eight brand new big stamp sets for you and two small ones! There is something for everyone in every style! It's the biggest release we've ever had.   All new sets, are 10% off right now  in the store until Jan 15th. Let me show you the new sets! (Please note! Samples with the new sets are shown at the end of the post!) We have some new members in our Carved Collection , Mixed Media Marks, Mix A Sentiment and Pencil Marks series. There are also some super cute animals for all pet lovers, some sketchy leaves and a nautical set for all your summer holidays projects.     Carved Collection #4 & #5   Pencil Marks #4 & #5            Mixed Media Marks #3       Sketchy Leaves        Garden Cats     AHOY     And last but not least our two new
Read more 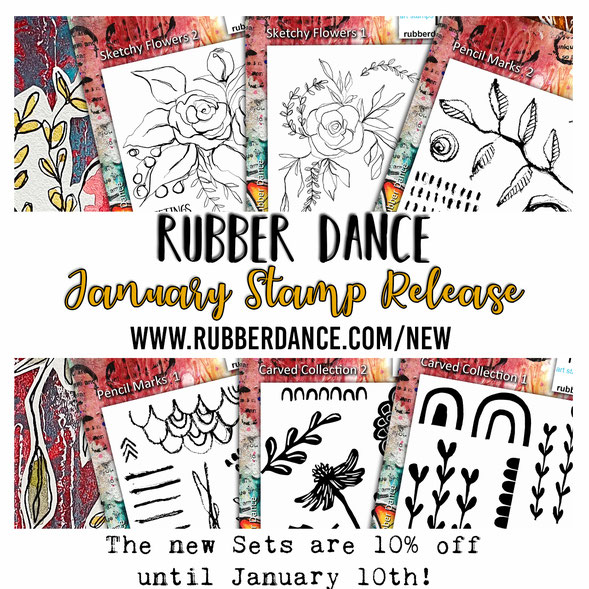 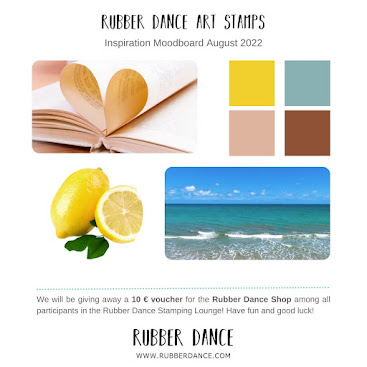 Visit our FB group and share your projects made with Rubber Dance Stamps. Be inspired by the moodboard and link up ANY new makes using Rubber Dance stamps for a chance to win €10 to spend in the shop.